Home > Review of Catamaran Designers
If you have carefully reviewed our “9 Essential Features for the Cruising Catamaran” you are now armed with the things to look for in a catamaran design. Our evaluation of the designers and their designs is from the point of view of the home builder. This means we are looking at the boats that can be readily built by an individual or husband/wife team. As Richard Woods says in his literature, “Boats of over 40 feet should not be built by the solo home builder because they just take too long. Life is too short,” and I would agree. The boatyards and backyards of the world are littered with uncompleted boats which have simply overwhelmed their builders. The comments that follow may be a little candid but they are based on our boat- building experience. All the boats described below, if built properly, are ocean-going boats. Our ratings of these designers are not an evaluation on whether their designs are good or bad, but more on their suitability for you building the design as a solo home builder. Some of their larger designs may also be good projects only if you are going to have the boat custom built for you or if you have hired help assisting you in your project. 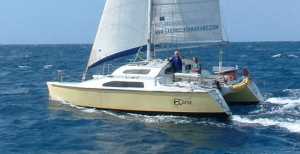 Richard Woods is based in the UK and is a well established catamaran designer. One thing that separates Richard from some of the other designers is that he has built many of his boats. I believe he is built over a dozen. His latest his the Eclipse 32 pictured on the right. That’s a lot of boat building. I think this coupled with his extensive sailing experience is why his boats are so practical. These are boats he wants to sail. As you know from reading other parts of our website, in 1997 we decided on Richard’s 28.5 foot Gypsy design. He had just built his own. He said, “this design incorporates all that we have learnt about cruising, living on board, and sailing boats in over 60,000 miles of sailing.” Click here for a full description of the Gypsy design used in the creation in Light Wave. We are probably a little biased towards Richard’s design’s but that is because we are so happy with the package of features our boat has. He had many smaller designs in the 20 to 25 foot range, but the Gypsy is the smallest boat that he considered to be a minimum ocean cruiser. Some people will say that 28.5 feet is just too small a boat for ocean cruising. We would disagree and so does Richard who specifies that “the Gypsy is good for trade wind ocean voyaging but not for going around Cape Horn” (so Carllie constantly reminds me.) What you have to remember is that most cruising boats are “manned” by a husband and wife team. Half the time under watch the boat will be operated by the smallest crew member which usually is the wife. On our boat Carllie can only operate the entire boat without my help. There are two easy to use 2-speed Andersen self-tailers. She can even haul up our main 22 lb Delta anchor by hand (even when Garett, The Windlass is too tired). Last summer, we met some people who had chartered a Lagoon 42 up in Desolation Sound. They invited us aboard their boat for a little tour. It was beautiful, enormous, and very very comfortable; but, and that is a big “but“, there is no way that boat could be handled by my wife, Carllie, on her own, and it may even be difficult for me. If the wife/partner/mate cannot handle the boat alone she is forced to wake up her husband on his off-watch. All this can be quite exhausting on a passage. What happens if the husband gets hurt or they get into heavy weather? 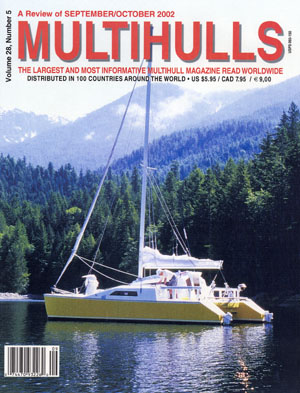 Because Richard builds his own boats, he, like you, wants to build the boat as fast as possible. The Gypsy and the 34-foot Romany (same bridge deck as Gypsy but longer hulls) use flat panel construction. Thus type of construction uses a flat mold which is quickly put together in about a day. You then lay up the fiberglass foam hull panels, 4 sides and 2 bottoms. The panels are then laid over the bulkheads. You might think that this might make the boat look boxy or home made but again Multihulls Magazine used a picture of Light Wave for its September 2002 cover so it can’t be that bad. Using this method, we made our two hulls in about 6 weeks. As well, the outside of the hulls come out almost perfectly fair, which saved us several hundred hours of back-breaking fairing and sanding. If we had the choice we would have built the 34-foot Romany (if the design had been available back in 1997 ….) with its longer hulls with their load capacity. Load capacity is the only thing we have to watch for on the Gypsy 28. He also has the 32 foot Eclipse as well as, the 38-foot Transat. Richard’s personal support during the building process was excellent in the many overseas telephone calls I placed to him. The only negative comment I would have would be relative to the level of detail on his plans. All the key items are there to build the basic structure but there are gaps relative to executing some of the interior and finishing details. This wasn’t really a problem as it allowed some creativity and some improved ideas ( i.e. sliding hatches into the hulls, cockpit seat backs, higher cuddy bridgedeck floor, etc.) . Even with this small drawback, we would highly Richard’s designs as they are specifically made for the home builder. Our top choice in terms of design is the Romany 34. I would estimate the construction time as 3,500 to 4,000 hours. 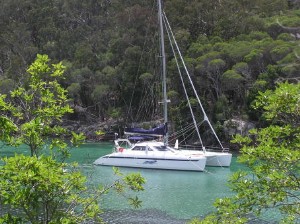 Jeff Schionning designs catamarans in Australia, and though some of his designs are built by commercial builders, most are built by people just like you with a dream. One of Schionning’s real innovations is the Wilderness series which goes from 9 meters up to 17. These boat are built from prefab epoxy Duracore™ (balsa core) panels. These panels are made under very controlled conditions. Using CAD technology, the pieces are then cut by computer-controlled milling machines and then shipped to the home builder. They are then glued and joined by the builder. This is one step ahead of the flat panel method that Richard Woods uses because these prefab panels are made out of epoxy and the resin to glass resin is very controlled. This results in a exceptionally light and strong panels and consequently a very quickly built quality boat. Schionning sells the panels marked and ready to cut and join. Based on the launching notices he publishes on his website, there are lot of people Schionning boats. Another of Schionning innovations is using outboard motors in vertical wells aft the end of each hull. You get the weight advantage of the new breed of 4-stroke Hondas and Yamahas as well as quicker installation, easier maintenance, and lower weight. He uses the outboard option on his designs up to 15 meters. We seriously looked at the Wilderness 1100 (11 meter) as our next boat about 2 years ago. It may still be our next boat, but we will wait until we get back from our 18-month cruise in our current boat starting in July 2006. Even though Wilderness 1100 is 7 feet bigger that Light Wave which took 3500 hours to build, I would estimate the time to build at 4,000 hours because of the time-saving panel construction method. So our top recommendation here is the Wilderness 1100. 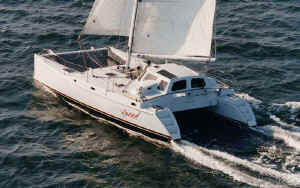 Chris White’s book, The Cruising Multihull, got me going on multihulls about 10 years ago. Chris has built many of his own designs. His own boat (as of a couple of years ago) was a 55-foot trimaran of his design called Juniper that he designed and built himself. He also offer several smaller trimaran designs for the racer/cruiser. In the catamaran area, his trademark boat is the Atlantic 42. As mentioned on our “Building a Cat” page, this design was on our shortlist when we were trying to decide on which catamaran to build. 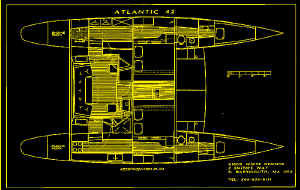 The main innovation of the Atlantic 42 is that the cockpit is positioned in forward of the pilothouse. This design feature has been incorporated into a few other mega-catamaran such as the Gunboat 62 and the big Gold Coast catamaran. In our marina we recently had an Atlantic 42 in our marina that was for sale. We got to carefully go through the boat and the layout really works. The steering view from the protected pilothouse is fantastic and protected from the weather. When you do have to work the sails, you open the front door and walk out into the central cockpit where all the sail handling is located. You are completely protected in this sunken cockpit and you are a good 8 feet from the edges of the boat. Back in the pilothouse, the aft settee is at the rear of the boat where there is the absolute least amount of motion. It is a great boat, but a big boat. It seems huge compared to our 28-foot Light Wave. Another plus of the Atlantic 42 is that the engines are in separate compartments accessible only from the outside aft decks. Many designers tend to “hide” diesels in catamarans under the aft berths. Inevitably the smell, heat, and noise leaks into the aft cabin making it unpleasant to live and sleep in. As well, there is a full length sound proofing bulkhead that completely separates the engine rooms from the rest of the boat. White’s specs the hulls to be built in strip cedar and, based on the fairing involved, I would estimate the time to build at 6,000 to 7,000 hours. White offers larger 46 and 48 foot versions but these would be truly big projects. However, these boats have been built by a few commercial builders so they do come up on the used market frequently. So my recommendation here is the Atlantic 42, but it is a big project. 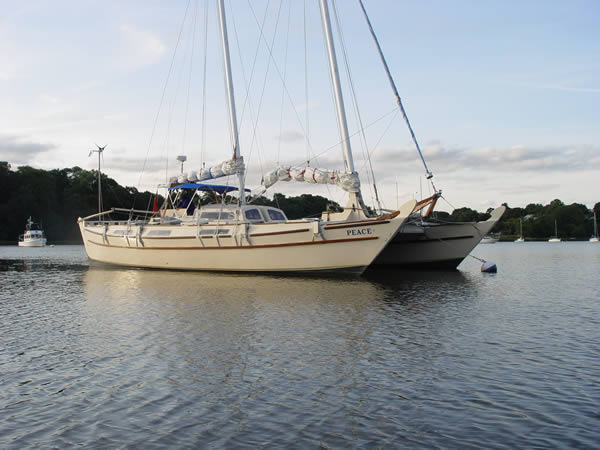 There are more Wharram catamarans out sailing than any other designer. James Wharram pioneered designing catamarans for the homebuilder. All of his designs show definite Polynesian roots in their canoe stern and V-shaped hulls. Many of his first generation models: Iriki, Narai, Tangaroa, and Tehini where designed for wood construction before epoxy became available. After 30 years many of these boats, if not very maintained, can appear quite run down. Wharrams’s latest design – Pahi and Tiki – are much more modern, and were designed to use current epoxy methods. These designs also incorporate a small bridge deck cabin as in our Woods Gypsy, but it is smaller without any standing headroom. The boat picture above is the Tiki 46 and it is our top recommendation. Though it is longer than the other designs from the other designers I’ve reviewed, this is because of the canoe shape of the hulls, so in fact, this boat is comparable to 35 foot designs. I would estimate the time to build one at 4,000 to 5,000 hours.

These are the top 4. I will be adding others over the next few months so please check back soon.